What is a crypto miner?

Mining is the process that Bitcoin and several other cryptocurrencies use to generate new coins and verify new transactions. It involves vast, decentralized networks of computers around the world that verify and secure blockchains – the virtual ledgers that document cryptocurrency transactions. In return for contributing their processing power, computers on the network are rewarded with new coins

Algorythm of the X4-1U Jasminer
There are several reasons why mining with the Ethash algorithm can be beneficial. To start, the algorithm is way too easy to implement.
The algorithm is practical, secure, and simple to use and solve block puzzles.

Speed is another reason why the miner is seen as an excellent investment decision. You get an algorithm that uses the Keccak function and the use of cache.
It’s one of the most efficient algorithms in terms of producing blocks.

The downside of the Ethash algorithm includes being ASIC resistant. There’s also excessive memory consumption making it challenging to mine.
Computers with low memory will find it hard to mine Ethash.

Efficiency of the X4-1U
0.462j/Mh is the efficiency that comes with this miner. However, it would be best to keep in mind that the maximum power consumption is 240W.
It’s one of the lowest power consumption levels we have. And this brings down running costs such as electricity expenses.

Thanks to the low hashrate, it means you get to mine for extended periods. The low electricity costs make sense that the hashrate is lower.
For those new to mining, the Jasminer x4-1U is the right miner.

The profitability of MicroBT Whatsminer M31s

The device mines Bitcoin on its SHA-256 mining algorithm. The profitability of the miner will depend on the price of Bt in the market. It will be crucial that the miner knows that this is estimated profitability gotten from the miner. The miner’s profitability per day is $1.41/day, $42.34/month, and $508.08/year. Other factors such as the power supply, temperature, and the hash rate can also affect the device’s profitability. 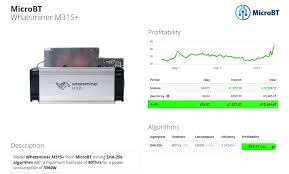 The efficiency of MicroBT Whatsminer M31s

This device’s efficiency, which is a result of the power and hash rate it consumes, is at 0.046j/Gh. This is poor compared to the MicroBT Whatsminer M30++ and other similar devices in the market.

The People’s Network is powered by an entirely new incentive model made possible by the Helium Blockchain and LongFiTM Technologies.

Helium Network creatively provides a scalable method for a LoRa-based network, develops the mechanism, and lays the foundation of The People’s Network, which is a milestone for long-range, low-power IoT applications.

With this unique incentive model, The People’s Network has become the infrastructure to foster more diverse IoT applications. As one of the miner hotspots certified by DeWi (The Decentralized Wireless Alliance), SenseCAP M1 enables you to mine cryptocurrency HNT while providing LoRaWAN network coverage.

Built with efficiency and hotter climates in mind, the BITMAIN ANTSPACE HK3 (known as model designation Antbox H3 V2 internally) has a maximum capacity of 210 units of Antminer S19 Pro+ Hydro with total consumption of a little over 1MW. The minimum ASIC quantity to compliment the order will be 195 S19 Pro+ Hydro units per container. This represents an approximate cost of $3,400,000 USD, plus shipping. The AntSpace HK3 is sold as a two-piece stackable set– a cooling tower and mining container. Refer to the brochure in the downloads tab for technical details.

Sharing my personal experience, most people still think that investing in crypto platforms earns them a lot , but ill will tell you that it is more preferable to invest in crypto mining machines as you will recover your investment , which you can still invest in other crypto platforms and still you have the machine.

What Is Antminer s9

Why did bitcoin fall